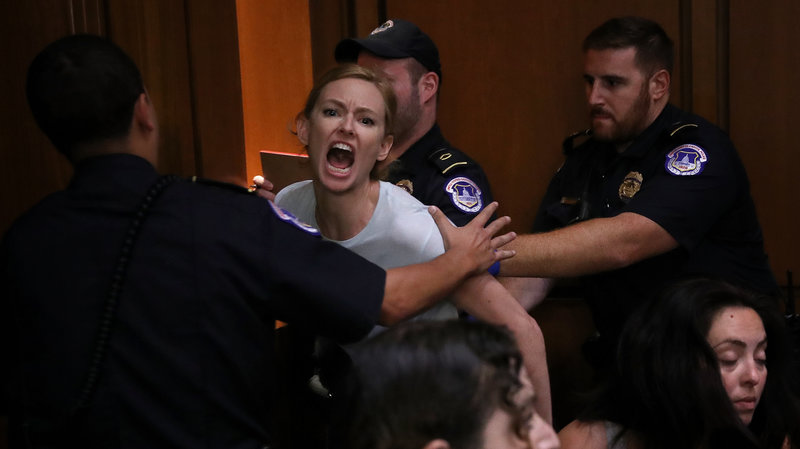 A single witness shall not suffice against a person for any crime or for any wrong in connection with any offense that he has committed.  Only on the evidence of two witnesses or of three witnesses shall a charge be established . . . and if the witness is a false witness and has accused his brother falsely, then you shall do to him as he had meant to do to his brother.  So shall you purge the evil from your midst” (Deut 19:15-19).

that every charge may be established by the evidence of two or three witnesses (Jesus as recorded in Matthew 18:16).

He who justifies the wicked and he who condemns the righteous are both alike an abomination to the Lord (Prov 17:15).

Our nation is at a cross roads.  Few can doubt it.

The #MeToo movement arrogantly calls itself an “era.”  Every day someone on the news or social media refers to the “MeToo Era.”  That seems rather arrogant for a movement that has only been around a year or so.  Only several decades will tell whether there was any lasting impact from this movement.

Right now, thanks in part to the Judge Kavanaugh hearings, there is a fairly strong backlash against the #MeToo movement.  The upcoming elections will be fascinating!  But the backlash, at least among some, is not against standing against legitimate abuse.  It is not against standing against denigrating women or stifling their voices.  No!  All sane and even half-way moral people are against abuse.

The backlash is against what this movement seems to be trying to do.  That is, change the paradigm of due process that has been the heart and soul of America for over 200 years:

Guilty upon a single accusation.

This is critically important stuff for our society!  For any society.  The principle of being innocent until proven guilty was drawn out of the Word of God.  While I realize America is in no way Old Covenant Israel, nor is our nation the Church, that does not mean that the principle of due diligence to prove someone’s guilt has no merits.  It has tons of merit!  And if you are the accused, you will most definitely want and expect due process to demand corroboration and evidence beyond a shadow of doubt before you are scalped.

We will never know what really happened on the day in 1982 described by Professor Ford.  I am not God.  Given the scant evidence and lack of corroboration, I cannot possibly come to any definitive conclusion regarding Judge Kavanaugh’s guilt or innocence.  But because I strongly hold to due process (innocent until proven guilty) I must at this point assume the Judge innocent of the specific charges brought against him by Professor Ford.

Hearing someone’s voice, or listening to someone’s story, is not the same thing as automatically assuming its truthfulness.  Truth must correspond to reality.  And from a worldview perspective, what we are seeing with the #MeToo movement is a logical conclusion to 50+ years of ethical relativism.  Relativism – the idea that truth is not absolute / objective but is rather relative / subjective – has been taught in our public schools and universities for at least 3-4 generations now.  What effect does that have upon a culture and society?

Well, we are hearing people tell women, “Speak your truth.”  The key word in that exhortation is “your.”  Your truth.  Her truth.  Their truth.  His truth.

What happened to just the truth?

It collapsed under the barrage of relativism that has brought us to this precipice.  This precipice where whatever we think about anyone or anything is our truth; and therefore is true.  Facts?  Evidence?  Corroboration?  Two or three witnesses?  Reliable witnesses.  Not the kind hired by Jezebel to condemn the good man Naboth (1 Kings 21).  Not the false witnesses that slandered the Righteous One Jesus (Matt 26:59-61).  Good, proven witnesses.

To help give a more honest perspective on what is really going on beneath the surface of this national conversation, maybe we should all ask ourselves, “Would this be happening if President Trump had nominated a woman for the Supreme Court?”  Granted, the Left hate conservative women, but I think we all surely must admit that this uncorroborated accusatory tone would not be happening if the nominee were a woman.  Turns our Relativism is never satisfied with genuine equality.

God help us if we abandon objective truth as a society.  God spare us from giving up on the dogged pursuit of Truth with a capital T.  We will disintegrate into social, moral, ethical, familial and economic chaos.  Come to think of it, that’s exactly what we see happening, isn’t it?

Is the #MeToo movement horrible and evil in all aspects?  Not at all.  To bring more attention to real abuses in our society is a good thing.  But I pray this movement can somehow find its way back home to good old, biblical due process.  I pray this movement anchors itself in objective truth.  For that’s the only way to truly show love for the hurting and disenfranchised.  Condemning the righteous or endorsing the guilty are abominable to the Lord.  And that is never good for anyone, anywhere at anytime.

Lord Jesus, You are the Truth.  You said God’s Word is truth.  Will you lead our nation to reacquaint itself with the concept of absolute moral truth anchored in Your revealed character and Word?  God, please do not allow Your true churches, filled with the redeemed in Christ, to drift away on the ocean of relativism.  Keep making us people of compassion who love so much that we insist on speaking Your truth to them, even as we listen to them.  Lord, we have all lied at some point.  Lord, we all have sinned.  All of us did evil things, especially in our younger years.  Father God, if someone ever accuses us as Your people of something that is true, give us grace to humbly admit it, confess it as sin and seek forgiveness from You and the offended person.  If we are falsely accused, help us not revile back, so that we glorify Jesus by following His perfect example (1 Peter 2:18-25).  Help us keep entrusting ourselves to our Heavenly Judge who does all things justly.  God, please keep exposing lies in our society and then give us grace to renounce them and cling to what is true, noble and good.  Most of all, Lord Jesus, we praise and thank You for receiving the “due process” of God’s wrath against our sins.  Because we have been shown such immense mercy in Christ, we can and must show mercy to others.  May we demonstrate that mercy even in the way we speak of Professor Ford, or other women who bring accusations.  And may we show that mercy to the accused as we diligently work to discover the truth corresponding to reality.  For Christ’s sake, amen.