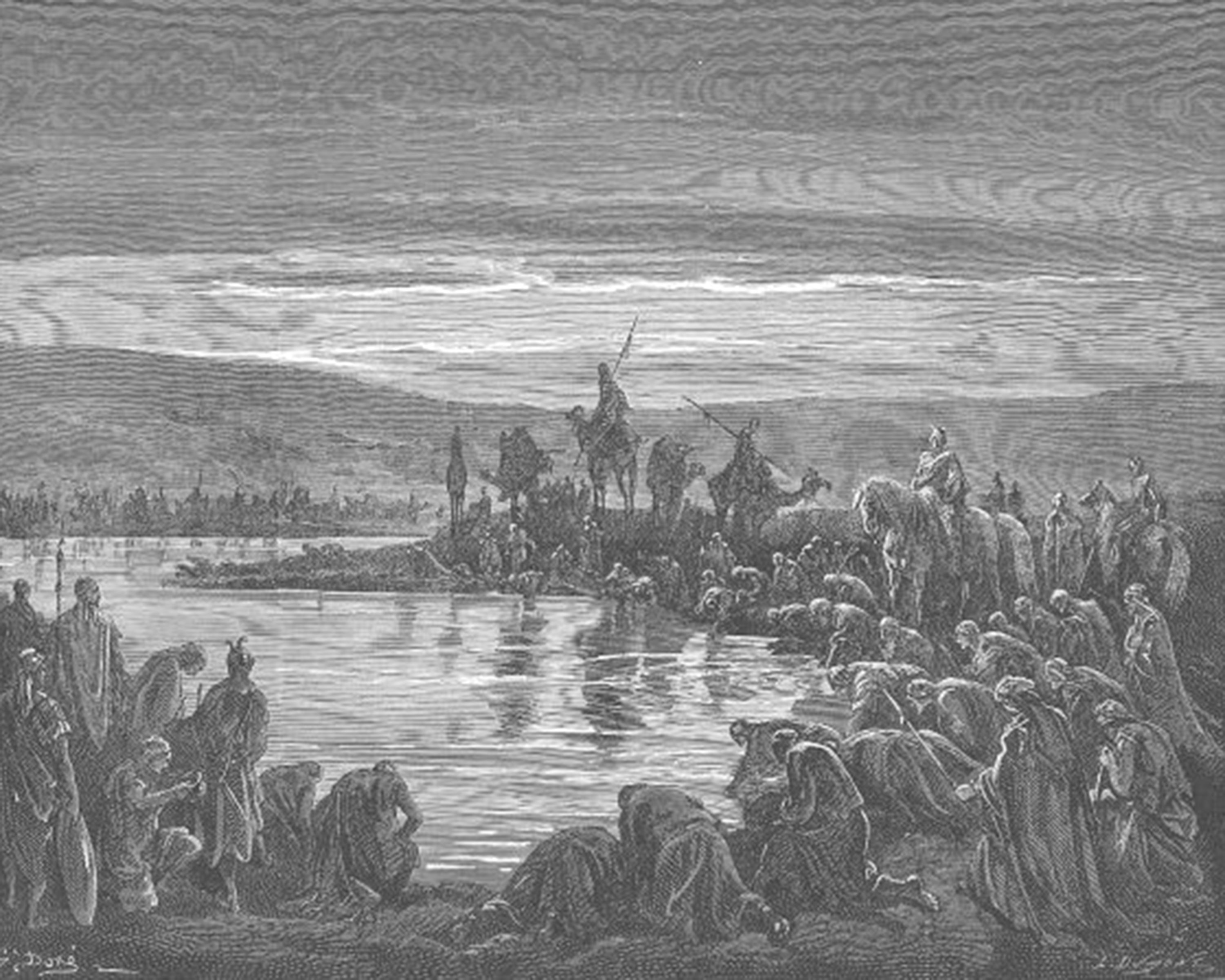 The two words go together like butter and biscuits.

Gideon is one of the more well known of the Judges of Israel, for two main reasons:

Rather than recount the entire story (it takes 3 chapters of the Book of Judges), I want to focus on the first point above, which tends to get the most attention in today’s Christian circles.

How many times have you heard a Christian speak of “putting out fleece” when trying to discern God’s will, or make a key decision in life?  I have not only heard it, I have tried to do it myself!  Now, by the phrase “putting out fleece” we do not mean we literally do what Gideon did.  We are not sneaking into the neighbor’s pasture at night to sheer off some wool from his sheep so we can lay it on the ground outside our bedrooms at night.  (At least I hope you aren’t.  That would just be weird and good luck even finding a sheep unless you live in a very rural area.)  What we mean, of course, is that we are asking God for a “sign.”  We want the Lord to give us some obvious clue that can be ascertained by one of our five senses, most especially our audio-visual senses.  We want to see or hear something from God that will nail down for certain what He desires in regards to the situation we are facing.  And it matters not what kind of decision we are facing.  I have heard of Christians seeking a sign to help them choose a car off the dealer’s lot, to pick which movie to watch on a Friday night, and to know if that girl I am dating is “the one.”

But is this what we are supposed to have gleaned from the account of Gideon?  Is the big point or lesson of the life of Gideon really reducible to “seek a sign when making a big decision?”  I, like so many other Christians, once thought so.  But that was before I learned how to really study a Bible passage in its context in order to mine the meaning.  And it was before I learned some key differences in the way God chose to reveal Himself in the Old Covenant as compared to the New Covenant in Christ Jesus.

Gideon’s putting out the fleece was an act of unbelief!

You heard me correctly.  Gideon showed a lack of faith by demanding these repeated signs.  He is small-faithed.  His “show me a sign” method of discernment is not commended.  It is, rather, merely described by the author of Judges.

God had already told Gideon that he was to lead the battle against the Midianites (6:14).  And in response to Gideon’s excuses (much like Moses), God even promised, “I will be with you, and you shall strike the Midianites as one man” (6:16).  Even with such clear Divine guidance, Gideon immediately asked for a sign, which God mercifully obliged (see 6:17-24).

So when it comes time to muster the army, you would think Gideon has his marching orders and is full of courage.

He asks twice more for signs (wet fleece one morning and dry fleece the next).  And rather than strike Gideon dead for his unbelief and cowardice, the Lord kindly obliges.  Which leads to the whittling down of the army from tens of thousands to only 300.  Which leads to the great victory over the army of Midian (Ch. 7).

The grand result of all this was the humbling of Gideon, and the glory of God.  When Gideon first spies out the camp of Midian, what he hears brings him to worship (7:15).  When others in Israel get in on the hot pursuit of the fleeing Midianite army, then begin to grumble about Gideon not initially including them in the fight, rather than recount the whole story of God trimming his army down, and his laying out of fleece, he simply says, “What have I been able to do in comparison with you?”  Humble.  Willing to deflect the credit.  And as the war rages on, Gideon just grows stronger and stronger.  So much so that the men of Israel ask him to be their king (8:22).

Gideon has gone from a whining, trembling idolater (see 6:13, 25-26) to a humble leader of men who gives glory to God Almighty!  Only a Holy Sovereign God could perform such a miraculous transformation.  And only our Lord could use such a little-faithed, weak-kneed man to accomplish His purposes.  Gideon is not great.  God is.

And we see this same truth hammered home even in Gideon’s final days.  It seems  Gideon just couldn’t get over his fetish with signs.  He took the golden jewelry from his troops and made an ephod (this was something only the priest was authorized to use to discern God’s will for His people).  Now, it doesn’t seem his intention was to cause the people to commit idolatry by making the ephod.  He probably just wanted to attempt to give folks something to see a sign from God when making decisions.  Nevertheless, it backfired on him.  Big time!

And Gideon made an ephod of the gold and put it in his city in Ophrah.  And all Israel whored after it there, and it became a snare to Gideon and to his family (8:27).

Wow.  Idolatry is never far from men’s hearts.  Which is why we must tread very lightly in the matter of seeking signs.  God’s Word (the Bible) is sufficient to equip us “for every good work” (2 Tim 3:16-17).  It is highly significant that after casting lots to select Matthias to replace Judas (which notably happens before the Holy Spirit comes to indwell believers at Pentecost), we do not see the church leaders ever again making decisions using those Old Covenant, “sign-type” methods.

And evil and adulterous generation seeks for a sign, but no sign will be given to it except the sign of Jonah (Jesus as recorded in Matthew 16:4).

Jesus has come.  Jesus has lived righteously in our place.  Jesus has died for our sins.  Jesus has risen.  Jesus has ascended to heaven and poured out the Spirit on His Church.  The eye-witness testimony to Jesus has been completed.  We have all we need to make godly decisions, be they big or small.

Let us not be small-faithed like Gideon; for our God has already spoken!