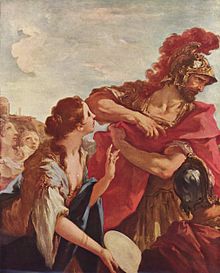 If a man vows a vow to the Lord, or swears an oath to bind himself by a pledge, he shall not break his word.  He shall do according to all that proceeds out of his mouth (Numbers 30:2).

Hardly the description we would expect of a man of God.  Jephthah’s brothers cast him out of the family because of his illegitimate status.  But God has a way of finding the outcast and turning the tables.  In time, the Ammonites were wreaking havoc on the Israelites.  They needed a warrior to lead them and deliver them from the oppressors.  Hmm. Where to find such a warrior?

O yeah, I remember, let’s go get Jephthah!  After chiding them for mistreating him and using him only for what he can do for them (Judges 11:4-11), Jephthah cuts a deal and agrees to lead the fight against the Ammonites.

When the Ammonite king accused Israel of seizing his land unfairly, Jephthah recounts an accurate history of Israel’s dealing with Moab and the Ammonites, refuting the king’s false claims.  This also shows us that Jephthah is very familiar with the Pentateuch (Genesis – Deuteronomy), aka The Law.  Irony of ironies, at a time when most of Israel cares not for God’s Law, an outcast son of a prostitute has obviously been reading and/or hearing the Law quite regularly.  So, the Spirit of God comes upon Jephthah to enable him to defeat the Ammonites in battle.  But just before he goes off to war, Jephthah makes a vow.  A tragic vow.

If You [God] will give the Ammonites into my hand, then whatever comes out of my house to meet me when I return in peace from the Ammonites shall be the Lord’s, and I will offer it up for a burnt offering.

Good gravy!  What did he expect to come out of his house?  I guess, like many today, he lived with lots of animals?  Pets perhaps?  Hard to imagine, though, that the typical animal sacrifice, such as a goat or ox or sheep would be living inside Jephthah’s home!  And yet, his vow stands.

And upon returning victorious from the battlefield, the first creature to rush out of his house to greet him is . . . his daughter.  Yikes!  And though some more liberal and/or squeemish scholars have tried to play down the text, it seems quite clear that Jephthah actually follows through and kills his daughter as a “sacrifice” to God.

Whoa.  Sickening.  What in the name of all things unholy are we to make of this?  Is this an endorsement of human sacrifice, in the Bible of all places?!  Was it right for Jephthah to make, much less keep such a vow?  A few points to guide our thoughts here:

So what lessons are there for us in the account of Jephthah?