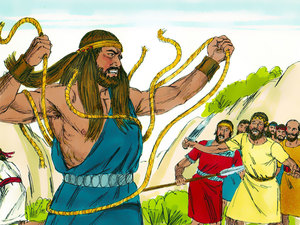 His name still stirs up images on a Herculean man, like Arnold Schwarzenegger in his bodybuilding hay day.  Samson is probably the most popular of the Judges of Israel.  His story is riveting.  One wonders why Hollywood has not latched onto it, as it would make for a blockbuster!  I mean this dude tore lions apart with his bare hands and killed 1,000 enemy soldiers with the jaw bone of a donkey.  Impressive.

In this man we see both human greatness and human weakness.  But more, we see the great power and grace of God at work on behalf of his sinful people.  Samson’s whole life, really, points to the sovereign determination of the Lord to bless and save His people, in spite of their wickedness.  And, in Samson, though he himself is often sinful, we catch a tiny glimpse of the ultimate salvation to come through Jesus.

Even Samson’s birth is miraculous.  His mother was barren, but God opened her womb.  God brought into existence what was not.  He spoke life where there was death.  In order to rescue His people from their enemies.

Samson was to be set apart for the Lord from the womb.  If we are paying attention, the summary of his youth points us forward to Christ the Savior in His youth:

And the woman bore a son and called His name Samson.  And the young man grew, and the Lord blessed him.  And the Spirit of the Lord began to stir him (Judges 13:24-25).

She will bear a son, and you shall call His name Jesus, for He will save His people from their sins . . . And Jesus increased in wisdom and in stature and in favor with God and man (Matthew 1:21; Luke 2:40).

But we dare not press this comparison too far!  For quite early in Samson’s life we see fatal flaws.  The Book of Wisdom compares a man who gives himself to forbidden, sinful women to an ox going to the slaughter (Prov 7:22).  If ever a man fit the description, Samson does.  His determination to have a wife of the Philistines (which was forbidden by God’s Law) is a classic example of God’s sovereignty alongside man’s evil and accountability.  Though God was working to defeat the Philistines through it all, Samson’s actions spring from his evil heart.  This guy has a blatant disregard for God’s Law.  He eats defiled food, and ignores purity laws, and causes others in his family to become ritually unclean without a care in the world (see Judges 14).

Yet, God is mightily at work in and through Samson!  God’s determination to bless His people and do good to them far exceeds Samson’s evil desires.  Samson’s plot backfires, at least from his own human perspective.  He loses his wife.  (Maybe calling her a “heifer” wasn’t the best idea?)  But behind the scenes, God has kindled the flame that will free Israel from foreign domination.  Amidst unspeakable acts of evil that so often characterize war, Samson seems to grow stronger both spiritually and physically.  After slaying 1,000 Philistines, he exclaims:

“You [Lord] have granted this great salvation by the hand of Your servant, and shall I now die of thirst and fall into the hands of the uncircumcised?”  And God split open the hollow place that is at Lehi and water came out from it.  And when he drank, his spirit returned and he revived (Judges 15:18-19).

Once again, we see our Lord so mercifully caring for a very sinful man.  We see God’s goodness overriding man’s rottenness.  And we leap forward to One greater and stronger than Samson who said He had living water.  Samson got thirsty again.  So did Israel.  But O what grace is ours as New Covenant Christians?!

Move over Samson.  We have found our true Deliverer and Source of Life!