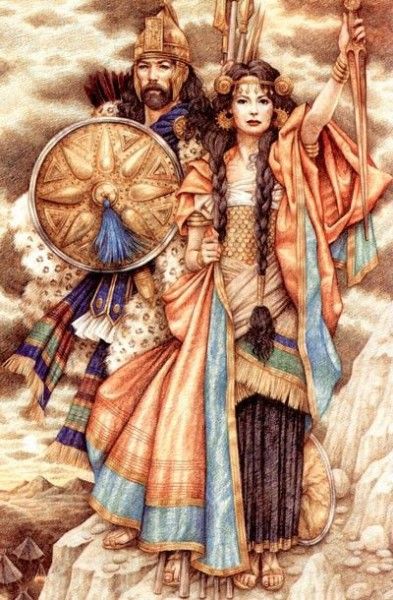 Deborah.  The only female judge of Israel.  A prophetess who spoke God’s words to Israel.

Hero of all feminists, evangelical or otherwise!  Some well-meaning brothers and sisters in Christ have tried to use the story of Deborah (Judges 4-5) to justify ordaining women as elders and preachers.  My intent here is not to tackle such issues, though I do want to insist that whatever we are to make of Deborah, we cannot interpret her role in such a way that it directly contradicts the clear teaching of the New Testament regarding the formal teaching office of the church being reserved for only men (1 Tim 2:8-15).  God cannot speak out of both sides of His mouth, and the principle of Christ-like male headship in the home and church is firmly ensconced in the New Testament (1 Cor 14:33-34; Eph 5:22-33; 1 Tim 3:1-2; 2 Tim 2:1-2; Titus 1:5-9).

Indeed, even the story of Deborah holds up the Divine expectation for men to lead and protect women!  The commander of the army of Israel is mocked by Deborah for not being willing to obey God and go to war with Sisera and his iron chariots unless Deborah went with him.  This is not godly male headship.  Putting a woman in harms way is never extolled as a manly virtue in the Bible.  In response to his cowardice, Deborah says,

I will surely go with you.  Nevertheless, the road on which you are going will not lead to your glory, for the Lord will sell Sisera into the hand of a woman (Judges 4:9).

We are supposed to audibly gasp.

Original Bible readers would have.  Unheard of, that a commander of warriors would need a woman to go out to war with him.  I realize this view is horribly unpopular and even mocked and derided by our overly-feminist culture today.  But it is the view of the Bible, especially in Old Covenant Israel (note the mocking tone of Isaiah 3:12, for example, when speaking of women ruling over Israel).

And yet Deborah is not the only hero of this story.  We might expect she means that God will deliver Sisera into her hand.  After all, she does strike us as a very strong and perhaps even physically imposing woman!  She shows no hesitation at all about going into battle with Barak.  I served in the Marine Corps with just such women.  Physically able and trained well.  I respected them and have no issue at all with women being physically fit, or using athletic skills on the fields of play,  etc.  But all that aside, God surprises us as we keep reading the account of Judges 4.

Sisera’s army is smashed.  And he escapes on foot, finding refuge (or so he thinks) in the tent of a woman named Jael.  Jael gives him milk to drink and hides him under a carpet.

But Jael the wife of Heber took a tent peg, and took a hammer in her hand.  Then she went to him softly and drove the peg into his temple until it went down into the ground while he was lying fast asleep from weariness.  So he died (4:21).

Well shut my mouth!  The fierce warrior-leader of iron chariots was taken down by a housewife.  So now we have two amazing women doing the work men should have done, all for the greater glory of God; for God has always been and will always be the only true Hero of the Bible:

So on that day God subdued Jabin the king of Canaan before the people of Israel (4;23).

And Deborah’s song (Judges 5) exalts God as she repeatedly sings, “Bless the Lord!”  She mentions her role.  And she even mentions Barak’s role.  But humanly speaking, it is Jael’s role that takes center stage in the song:

Most blessed of women be Jael, the wife of Heber the Kenite, of tent-dwelling women most blessed . . . she sent her hand to the tent peg and her right hand to the workman’s mallet; she struck Sisera; she crushed his head; she shattered and pierced his temple.  Between her feet he sank, he fell, he lay still (5:24-27).

Then the conclusion of the song: “So may all your enemies perish, O Lord!”  Well, praise God.  What foreshadows we see here.  The head-crushing language harkens back to Genesis 3, doesn’t it?  There God promised a seed (male offspring) of Eve would crush the serpent’s head.  And Jesus came “to destroy the works of the devil” (1 John 3:8), and to “destroy the one who has the power of death, that is, the devil” (Heb 2:14).  On the cross, Jesus “disarmed the rulers and authorities, putting them to open shame by triumphing over them” (Col 2:15).  We see much of our Savior in Sisters Deborah and Jael, don’t we?

And we get glimpses through them of the great leveling of the playing field that was coming.  That day has come.  The day when all who trust Christ alone for salvation, male, female, slave or free, are “all sons of God” and “heirs according to promise” and “an heir through God” (Gal 3:26, 29; 4:7).  Judges 4-5 point us forward to the day when “The God of peace will soon crush Satan under your feet,” O church (Rom 16:20).  What a day, when we will all gather around God’s throne from every tribe, tongue and nation and see Satan sink between our feet!

The story of Deborah and Barak and Jael remind us that no man or woman, no matter how strong and heroic, can put the tent peg through the temple of the true enemy of our souls.  Sure, there are lots of other “lesser lessons” regarding manhood, womanhood, Old v. New Covenant, physical v. spiritual warfare, and so on.  But we dare not miss the Big Lesson.  The Big Hero.  Who Stands Over it All.

For if Deborah and Barak and Jael could stand before us and speak directly to us and sing for us today, they would no doubt shout, “Worthy is the Lamb who was slain!”  For by His death and resurrection life, death itself finally dies.